This story starts in a printshop in Belgium, which we’ve known for a long time. The printshop was taken over by a large print group. The new owner invited us to make a price quote to buy several of these machines, as he didn’t need the extra production capacity.

The machinery park of the printshop contained many larger machines, such as a Polar N 115 Plus cutting machine, two Bobst SP 104-E die cutters, a Bobst Media folder gluer, Roland 702 3B LV offset printing press and a Roland 704 3B LV HiPrint (SPL) offset printing press 4 colours with coater, which we’ll tell you about in this story.

Dismantling at the printshop

The dismantling all together was a huge project and took several weeks. Our technicians had to return to the printshop several times. The final machine to come out of the printshop, was to be the Roland 704 3B LV HiPrint. During dismantling, we could find out the press had some technical issues as well as a situation in the pump cabinet. (Story continues after the photos) 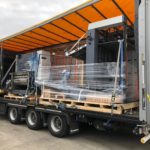 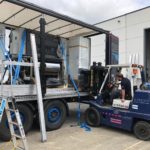 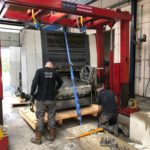 Dismantling at the Belgium Printshop 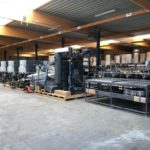 Dismantling at the Belgium Printshop

Naturally, we would not sell a machine to any potential customer without providing the necessarily repairs. Therefore the machine was transported with a heightened truck to our main warehouse in Roosendaal, The Netherlands. In our workshop, our technicians were able to perform the repairs needed. The pump cabinet situation was resolved by installing a new side channel ventilating pump, returning the printing press to its original configuration.

The Roland 704 3B LV HiPrint appeared to be of high interest to many clients. The printing press was raised, which provides the option to have larger pallets of paper or carton at the infeed as well as the delivery. The Roland was also equipped with SPL, known as Simultaneous Plate Change. SPL in mainly interesting when a printshop is printing smaller circulation. All in all, it was no surprise that the machine was sold quickly, to one of our most trusted customers in China.

Loading the machine had to be done with a special type of transport. Usually, one would load the dismantled parts into separate containers. With this machine the delivery was higher as one normally might expect with such a machine. Therefore, we had to arrange a special container with an open top to ensure safe transport overseas was secured.

The company Van Doorn in Rotterdam was recommended to us. At this company, we ordered a special tarpaulin, especially made to cover the container. Van Doorn was informed about the open top container which would be used to load the machine, so they knew what kind of attachments were to be made onto the tarpaulin. Easy said, easy done. A tailor-made sail was ordered from Van Doorn. 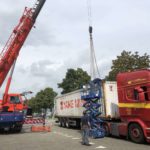 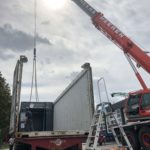 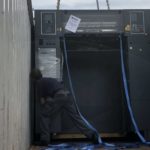 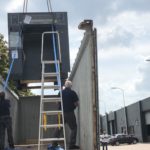 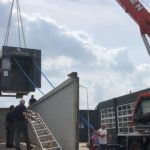 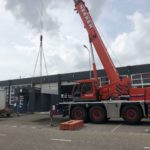 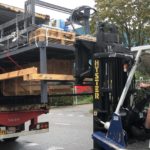 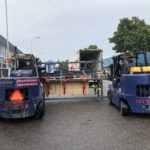 As the open top container arrived at our warehouse, so did a crane coming from Van Heeren. Van Heeren is a company specialised in cranes as well as machinery relocations. The crane operator was a skilful man, who carefully hoisted the delivery of the offset printing press into the container. He was working closely with our technical people on the ground. Fitting the delivery into the open top container was tight, as there was a small gap of only a few centimetres between the machine and the side panel of the container. After the other parts had been placed in the open top, the open top container was covered with the special tarpaulin made by van Doorn and the Roland 704 was ready to make its way to the harbour and its final destination: China.

Check the video of the loading with the crane: