Many offset presses are wide and long. However, some presses are designed to fit in a shorter amount of space: the special double deckers used for two-sided printing in one pass. A long time relation from the Netherlands approached us as they experienced to have less and less production orders for the printing press. They wished to sell the Komori LS 440 SP double decker printing press situated in their printshop. We could swiftly come to an agreement and discussed to keep the press on site for the time being.

In the meantime we could find several interested potential customers coming from Asia. Many from our trusted relations in China and Hong Kong shown their interest in the Komori. Eventually our customer in Korea was the lucky ‘winner’ in the battle for acquiring this machine. The deal was quickly made and dismantling of the Komori could start.

Dismantling double decker offset printing presses is becoming one of our specialties at Mekes Graphic Machinery. Back in 2018 and 2017, we have already dismantled three printing presses which were also double decker printing presses. The Komori SP model, constructed in Japan, has not been imported since several years in Europe. The press was designed to merge the strengths of both web and sheetfed presses.

Our double decker specialist mechanic Jordi from Spain was flown in to the Netherlands. As Jordi had already dismantled several double decker presses before, it was without doubt the best thing we could do. Dismantling the press went smoothly. It is a difficult and special job to install and dismantle these kinds of machines. Various attachments are required to support all elements.

Two 40ft containers and two flatrack containers were required in order to transport the Komori. The vessel with the Komori on board has set sail for Busan, Korea. Expectations are that the ship will arrive in July. The customer will arrange for technicians on site to assemble the Komori once more. The Komori LS 440 SP will continue production in a country far away.

Good luck Komori, we wish you all the best. 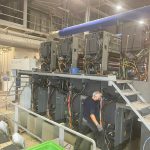 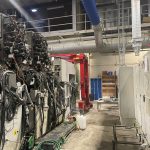 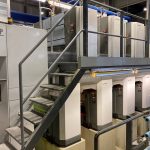 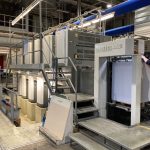 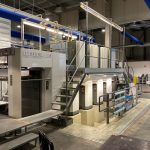 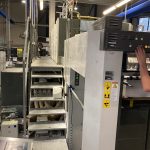 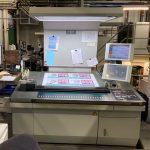